The webmaster spoke to Gary at BIAFF. This is a transcript of their conversation.
Gary Hewitt on making Mia: A Rapture 2.0 Production
The Beginning
I was walking through Paisley, which is a small town in Scotland just outside of Glasgow. It was a Sunday and it was very quiet. Very dead. I thought wouldn’t it be strange if you could see one single person walking down this High Street, and no-one else is about. And those are the first shots of the film when the cans are rolling down and you see the legs, and then you see the figure of Mia. ​
A pessimistic story?
I would take it that we could learn a lot from the film. There isn’t much hope for humanity in it but what we can take from it is to think about what we are doing today. From music videos to film it is all sexualised. It is all about glamour and stuff like that and corporate companies making money when things go wrong. So we can flip that on its head and say that’s the way the world is going to be if we don’t watch what we are doing. There is so much of technology just now that’s changing the world – like Artificial Intelligence or Alexa where by just talking to it you can get it to turn on a light. How far do we go with all that? James Cameron has spoken about this for years and its not really changed. I’ve just put a new spin on it.
From script to film
I was at a Christmas Networking Night in Glasgow and I came across Diane, who is now the producer of the film. Diane hadn’t produced anything at all before that. I think she’s done a terrific job on it, the film looks marvellous. Diane has done a lot of voice-over acting, stage acting, screen acting but she was keen to do more. So I asked if she wanted to take a chance and produce this film. She welcomed the opportunity. A bond was created. I told her what I was looking for and she was happy to try. What made her unique was she was happy to try things that someone who’d been producing for years wouldn’t try because she wouldn’t know if they’d work or not.
We went from crowd funding to, for example, approaching a new Harley Davidson factory that has opened up in Glasgow and asking ‘Would you be interested in donating a gift for a crowd funder?’ Wee things like that. ​We crowd funded about £900 and that went mostly on catering. A well fed crew is a happy crew.
Then we had to cast it and do auditions. We had over forty people audition just for the part of Mia so there was a lot of people to work through. I’m lucky because I work in an events venue. So at the venue I asked if they’d let me use a room for nothing (just a wee credit on the film) for the auditions. That’s how we did the casting.
Then it came down to crew. I’ve worked with different crew members in the past and I wanted some fresh faces. So we asked people if they wanted to read the script and if they liked it. For example we went to a cinematographer and explained that we didn’t have any money but asked if he could get some good pictures from it that he could use in his show reel. He said ‘Yes, there’s something there I can take.’ So he agreed. And there’s a makeup artist, she teaches makeup.  She put some imagery on Facebook. I told her I really liked what she was doing and asked if she’d be willing to work on this.
​I think they just really liked the script and felt they could capitalise on it for themselves. From there we just built up into a family.
Another story about Diane. We were looking at locations, searching for an old farmhouse. We had looked at several that were not right. But as we passed a house, I said ‘That’s what I’m looking for. Something like that.’ She just knocked on the door and asked them. Other producers would look for phone numbers or email addresses but she just knocked at the door.
Regarding other crew: I had worked with Alistair Biggar (sound) in the past. We work great together. For music I basically picked a scene in the film and gave it to a few people to score. John McFarlane, who ended up doing it, came back and blew me away. He was at University and wanted to try new things. 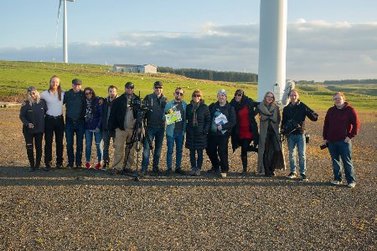 Cast and crew (Photo by Chris Quick)
We shot the film in four days. Very fast. But we worked as a family and everyone new their jobs. If everyone puts their mind to it and if there is a lot of planning you can get somewhere. The film has done well here at BIAFF (this is our first Festival so far). It works because a lot of thought went into pre-production. I wrote it in January and we didn’t film until May.

​Filming in an empty town.
As I said, I had seen it almost empty on a Sunday afternoon when there were a few bodies about but not many. So we contacted a local coffee shop and asked if they could open up early for us at 5 in the morning. I said in return we’d have our lunch in there so they’d get some profit later in the day. So we were stood on the High Street at 6 in the morning on a Sunday and the only people about were a few bin men. We got one of the runners to ask them to step to the side a bit, which they were happy to do. We had four attempts at that main shot. For the shot where she walks through the pigeons, we’d put down some bread to bring them in and they were supposed to flutter and fly up. But they refused, they must have been very hungry. So in the end we had just one successful attempt at that.

The colour palette of the film.
Going back to Mia learning from humanity, she is obviously some kind of android but she doesn’t know a lot and has only been given one purpose. So we wanted her to be monotone. Then as she learns more we bring up the colour and make it more saturated to show that her life is changing for the better. The man has nothing really to live for, just to survive, but as he interacts with Mia he begins to have more of a life. The flashback scenes are bright and glamorous because that’s the life he once had. So he had gone grey and maybe could get his life back to being colourful again
Are you happy with how it turned out?
Yes. It was only twelve pages. At a page a minute it was only supposed to be twelve minutes. The first cut was twenty-five minutes and we got it down to nineteen. So it wasn’t meant to be as long but people say it doesn’t feel that long when they are watching it. They get engrossed in it. So if the audience is happy, I’m happy.
There has been a lot of people asking if I’m going to do a feature film or push for more. There is a whole world there but we only tell the story of these two characters. We could change it and make it bigger and if the audience want it then I’ll write it.
I would take it further. It is left very open at the end with her promising to teach the other android so I would work with that. But it depends on what the audience want to see. That’s what is great about these festivals. Because you find out what people want to know and what they actually think of it.

What other benefits do you get from coming to festivals?
It is great. You can see what other film makers are doing. You can see where you are in that world. It gives you a chance to network. And it is a good vibe. If you talk to people who aren’t into film making they don’t quite understand the passion that goes into it. When you come to events like this people sit there engrossed and then they want to talk about this film or that film. It is good and energetic. Then it’s a come down when it all finishes and you want to get on to the next one. I would love to travel with the film and see what happens.
​April 2018
Thanks to Gordon Hunt for recording the conversation
​back to interviews