Martin Evans on the making of Bite Off
My background in film-making is mostly one of dreaming about film-making. Coming from a family of church mice, actually having the wherewithal to own and operate a video camera didn't happen until middle age. But what did serve me well is a long career in computer program design. So getting my head around all that clever software is a doddle.
The best thing about being amateur is you make whatever pleases. No commercial pressure whatsoever. And if it pleases others too then that's the icing. I am drawn to the comic side of life and really adore a good spoof. Throw in a little character study and then you have my ideal  film. I'm also a small noise in the world of poetry and often put the two disciplines together with modest success as film-poems. (Look for Martin's other entries in BIAFF 2019.)

I just love editing. Leave me with my computer and a complete mess of footage to stitch together and I'm happy. There's an enormous amount of problem solving to be done in the editing phase. When I retired from 30 years as a computer programmer I wondered what would prevent that recently redundant part of my brain from withering and falling off. Editing is most definitely it. I'm including the whole gathering of resources here too: making and sourcing Foley sounds, music tracks, grading, matching shots, syncing, shaving seconds here and there - the whole construction of a finished product from a bucket of bits.

The least enjoyable, for me - and I'm loathe to say this - is probably the actual filming. First there's the stress of setting the camera, lights, microphones, props ready to roll, and then I have to take a deep breath, remember who I'm supposed to be and get to the front of the camera. (Martin usually plays a lead role in his films) It's not that I don't love it, but it's the bit that makes me sweat the most and tires me out. 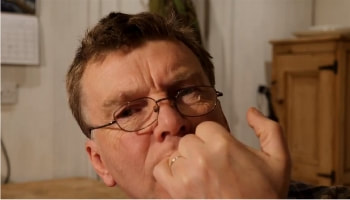 The idea for Bite Off came about during BIAFF 2018. On the Saturday evening we were in a pub in Harrogate and watched with fascinated horror as a woman gnawed her fingernails with complete concentrated precision. Keri turned to me and said "that's what you look like!" I realised she was right, promised internally to be less obvious, but the idea for competitive nail-biting was born.

I love doing the acting - I write these parts just for me, but I could only ever act in my own films. So my part, while it starts out as a full written script is gradually reduced by simmering to just a load of single-word bullet points. This then allows me to sort of ad-lib from one pointer to the next and feels a whole lot more natural than remembering actual lines. To be honest, by this time, I completely believe I'm the character anyway, so I am just behaving and talking normally.

(Spoiler alert) We always wanted to get our man to be involved in the illicit stuff at the end despite his saying that the toenail competitions were for the washed-up and the criminal. But then we filmed some long takes of Derek watching himself at the awards with almost a tear in his eye. We lingered on him just as we did when he was watching the Elbonian Youtuber. Basically, it became a little darker than originally anticipated but it rounded the whole thing out nicely, we felt.

Derek Roberts, the protaganist, is an evolving character. He is a pastiche of the electrician who re-wired our house, a friend's friend who lives in a bus and also myself. He has the values of an ordinary working man and a rather simple view of the world. His first outing was unnamed in our film The Pole Liner, another mockumentary about a man who measures the alignment of telegraph poles. His accent is very much of the Marcher lands - where Wales meets Shropshire. It's a great accent, and one I can slip into very easily. And when I do, I believe every word I'm saying. I write the scripts in this accent.

We didn't collect real finger nails for the film. We might both have been sick! These were false nails that our massive budget allowed us to buy off eBay. I cut them into tiny pieces into a couple of matchboxes. Besides, I didn't have any nails left at this point anyway.

Our biggest problem was getting the wife's family on board as extras. It was like herding cats. The doorman, Mark - who is a completely lovely fellow by the way - didn't listen to a word I said and had his own ideas about what we were filming. Time was short, dinner was almost ready so I had to go with what I got and carefully edited it down to the 20 seconds or so that made it to the film. The thing about family is that they want to do their best for you, which unfortunately means they completely over-act. You should have seen the bits I cut... Perhaps not.

What makes one person laugh will leave another completely cold, such is the nature of comedy. You can't really view your own work objectively, so the best thing is to watch other people watching your work - preferably with them thinking you're not there - so they're not laughing for your benefit. That way you find out what works, and more importantly, what doesn't. Ultimately I think that all comedy stems from our humanness. So a character with some depth will always be funnier than a two-dimensional slapsticker. The more defined your character, the more you can drop them into any situation and their reaction, as a normal human being, with all their frailties, hang-ups and prejudice will make the comedy