Sattar Chamani Gol on the making of Golnesa
I hope all independent filmmakers can make their ideas into films, because the greatest filmmakers are among  independent filmmakers.
I also wish that no one has to leave their country to immigrate to other countries.
​I hope that women's rights in Iran, Iraq and Afghanistan are paid attention to.
​
And I hope to be able to take part in your festival again. 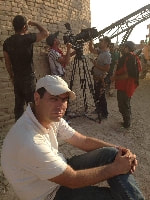 Sattar on set
I started my career with performing in and later directing plays. My first film making experience goes back to 2001 and so far I have made 23 documentaries, 7 short fiction films and 4 TV series. Golnesa is my first feature film.

The idea of Golnesa came to us from a short story written by my wife, Vida Salehi. I read it and recommended that she make a script out of it, hence the film script.  (The story is about Golnesa who falls in love with Golmammad. She runs away with him from Afghanistan to Iran because her family disapproves. In Iran, they have no papers and have to hide and work in a brick factory.)

​I tried to portray women and their rights, as it was very important to me.
The crew, cast and I teamed up for Golnesa for the first time. I have an earlier acquaintance with Mohammad Fakouri, the camera man, and I had seen great works from him. We sent him the script and he agreed to join us happily.
The music was recommended to me by one of my friends who introduced Karang Karbasi to write the music of the film. He has a Ph.D. in oriental music and has an impressive knowledge of Afghan music. The musicians who played the pieces are all from Afghanistan, and the music was recorded in a studio.
The actors are all Iranian, well known drama actors, none of whom is Afghan.
​​The location was a traditional brick making kiln for which we searched for a month.  ​​
Because of the contrast between the actors of the film, I tried to portray this contrast in the light of the scenes, using natural sun light. ​For Mr Kazemi, since I didn't predict a good future in the end of the film, I placed him in the dark to communicate this message. I used light to imply these ideas.
Since the camera was stationary, I wanted that the actors do mise en scène instead of the camera. Therefore I made use of every thing on the set.
Using light and windows was very important to me and I am glad I communicated this with the audience. Showing Golmammad among the hard bricks, I wished to imply his difficult life conditions.

(Spoiler alert) I think Golnessa is a victim of her own love. She loves Golmammad, moves to a country where she knows no one except for Golmammad and then Golmammad can't take good care of her. Golmammad didn't think she would get killed by Afghans, but these people did kill her.
​Unfortunately the movie is banned inside Iran, and the government has disallowed screening it in the theatre. I don't know what the Iranian audience thinks of the film. It's been screened outside Iran and the reactions to the film were great, both with the protagonists and the story. I think they have identified more with Golnesa. As the director of the film, I like both characters.
The biggest problem in making the film was financial support. We are independent filmmakers and get no budget from the country. Our next project is about Kolbars - those carriers who transport goods on the borders of Kurdistan. But this project is halted for financial reasons.

​Sattar Chamani Gol
back to interviews