​back to interviews
Ian Crowther on making
​Angel Meadow
​
​Angel Meadow received a Diamond award, Best Documentary and Best Film from an Affiliated Club
(Thanks to Tim Stannard for interviewing Ian)

​What inspired you to make this film?
The film developed in a roundabout way. I’d worked with John Harris on another project, we had a good working relationship and I saw an opportunity to take the raw footage I’d already shot, expand on it and create something bigger and better. I knew John was keen to develop his presentation skills so to invite him on board was a no brainer. Originally it was to be a collection of images set to music but with John's input, we created a structured story.
How did you research the material/what are your sources?
I'd been aware of the Angel Meadow area for many years but never actually visited until early 2017. Even then it was clear the area was changing. Being a keen photographer, I’d taken a series of still images on this first visit and soon after delved deeper into its history.   There's a fantastic book by Dean Kirby, Angel Meadow, Britain’s Most Savage Slum (a rich source of information for those wanting to delve deep), and plenty of online history.  As I've aged, I’ve become fascinated with local history ... I absolutely hated history at school. 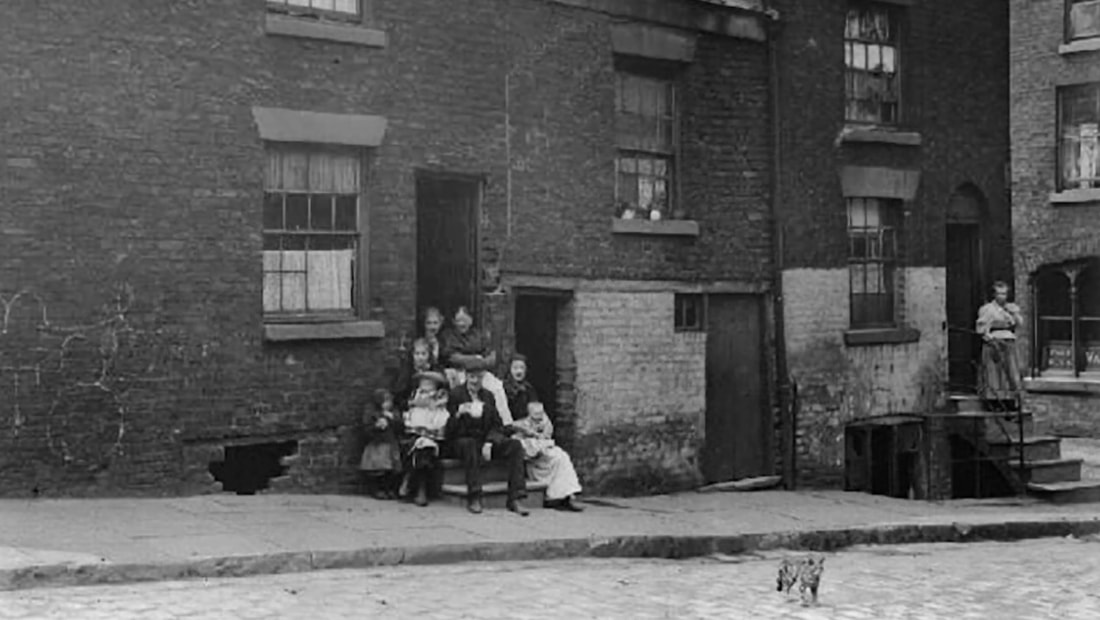 Where did you get hold of all the archive material?
Like many folk working on historical projects, scouring the internet opens up a wealth of material. Wikipedia is a good starting point for historical material though, obviously, you need to be mindful of the validity.  With Angel Meadow, there are lots of images and maps etc. online.
What is your relationship with John Harris: who is he and how did he become involved?
John first approached Bolton Movie Makers (my local club) enquiring if anybody was interested in documenting another local area of interest. He hadn’t done any "to camera" presentation at that stage but was keen to “have a go”. It's great watching the earlier film then witnessing John's much-improved presentation in Angel Meadow. Again… it’s all a learning curve for us amateurs. 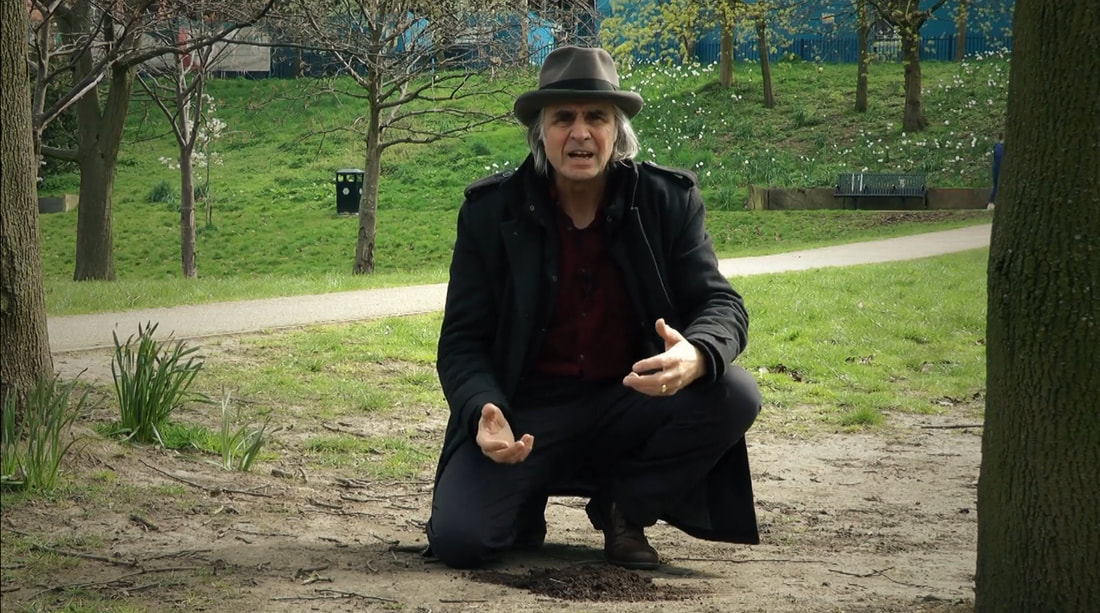 John Harris
Once you’d decided on the subject how did you approach creating the film?
From my original idea of producing a film/music montage, I had lots of material already shot.  With John now on board, I asked him to prepare a script. Once drafted, we worked together to refine/edit it into blocks (chapters) after which I worked out what additional footage would be required i.e. John's pieces to camera, and additional B roll footage for voice-over sections. There were around 5 visits to the area including reshooting the under arch scene (5 stars for Johns clothing continuity).  I was keen to make the finished film no longer than 10 minutes total running time.  At the editing stage, two members from Bolton Movie Makers were brought in to do voiceovers, Paul Ashlin for the voice of Friedrich Engels and Pat Starkey* the voice of Lydia Becker ) not forgetting our location sound recordist, Jack McEwan.  The total budget for the film was less than a tenner …   the price of a few brews on location ;-)
The music is particularly well suited, did you already know what pieces you wanted or did you spend a lot of time scouring possible sources?
The music and sound design is without exception my favourite part of the editing process. As we all know, music can send the imagery in all kinds of directions and the melancholic, dramatic music used I think works well with the often dark and drab imagery. Though I say so myself, I have a good ear for music.  I’m constantly listening, sourcing, and archiving music to use in my films. I'm a long time music fan (too loud and too often)  and have the onset of tinnitus to show for it. Guess I’m a frustrated musician/music video director. 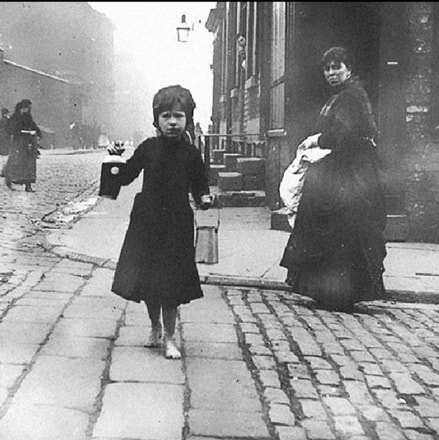 There are several cinematic tricks in the film. Are there any your particularly pleased with?
Yes, I had fun with the “old to new” imagery, in particular the Irk Street scene. initially, I toyed with morphing the Irk street image to the present-day moving footage but in the end, settled for the good old crossfade. I actually had the original photo on my mobile phone to reference at the scene set up a tripod and tried to frame the camera as close as possible to the original picture.
​I'm not sure if it could be described as a cinematic trick, but all the dolly and crane type camera movement is actually handheld camera slowed down or stabilized in post-production. Previously, I’ve been criticised for constantly having the camera moving – it’s just the way I like to do things. Cameras used were Panasonic HD700 and Sony HX90v. John’s audio recorded with Sennheiser wireless lavalier  and Rode Go
​How long did the project take from decision to make it to final version. And is what we saw, the final version?
I shot the first footage in early 2017  and the last footage in early 2019…incidentally, I’m the only person ever to see the final edit as it was lost in a hard drive “incident” along with lots of the original raw footage so… The version entered into BIAFF was the penultimate version. 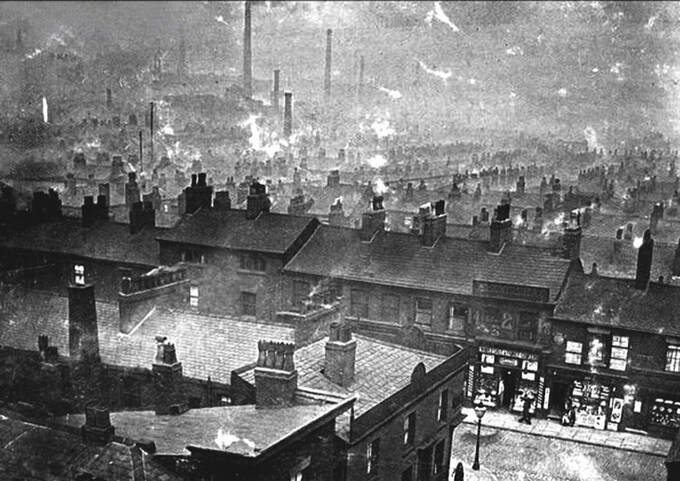 What next?
During the summer of 2020, I was set to embark on a new project with John but the Covid outbreak put a hold on the project hopefully we’ll start shooting early next year …  The true story of a local Highwayman …
*I'd like to take the opportunity to pay my respects to Pat Starkey, the voice of Lydia Becker in Angel Meadow who passed away earlier this year. Pat was a huge film fan and always very supportive of my projects. A Huge loss to Bolton Movie Makers.
​back to interviews