​back to interviews
Elise Martin & Jess Bartlett on making
​Dearly Departed
Dearly Departed was our graduate film at University - we crewed up with fellow students on our film production course to create the film.
​One of our composers/musicians Demi Marriner attended the same University as us but was enrolled on the music course - she then brought on her partner and frequent collaborator Robbie Cavanagh, which was brilliant! The wonderful actors were all sourced and cast from online casting websites. ​​ 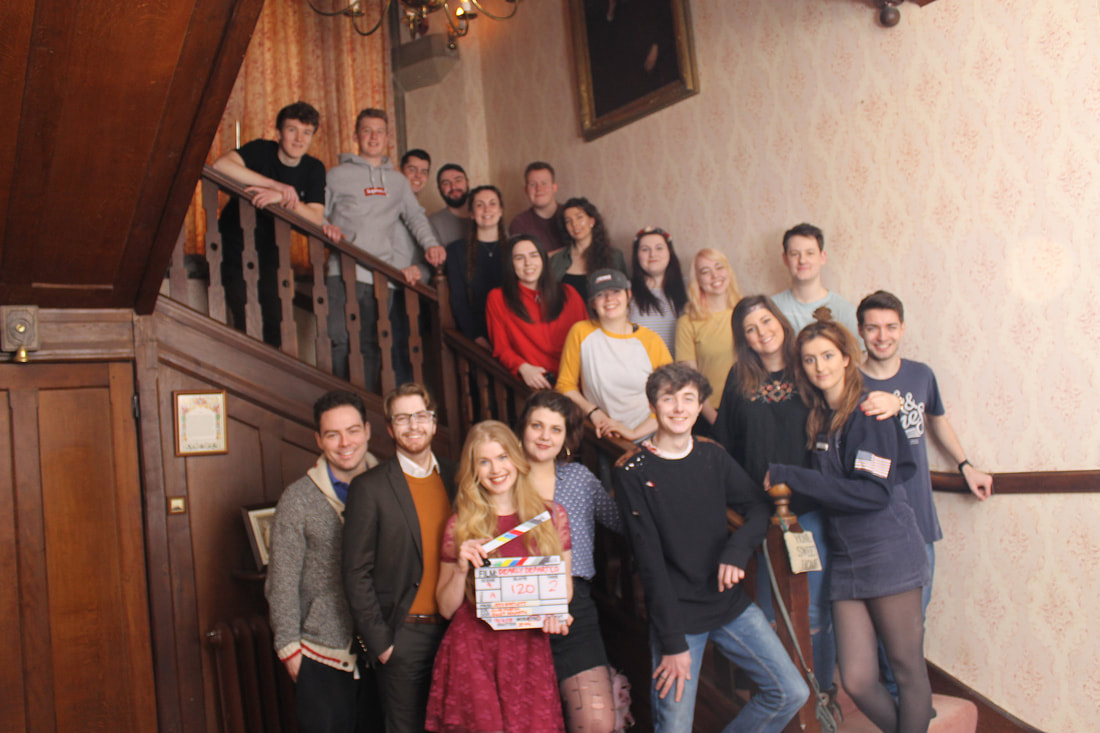 ​The film is an unusual mixture - a musical with a dark centre (Sweeney Todd springs to mind). Why did you go for this?
Elise: I think the mixture of genre tropes and influences comes from having two creatives behind the story. Jess and I are both huge musical fans and both grew up watching Disney but we also both brought ideas from other passions and genres we enjoy and found that we enjoyed challenging the audiences expectations – rather than just showing ‘another love story’.
Jess: As lifelong musical-lovers, Elise and I had wanted to make a musical for a couple of years prior to the film. The inspiration for Dearly Departed was to create a musical in the style of films which we love such as ‘Coraline’, ‘ParaNorman’ and ‘The Love Witch’, all with elements of the dark fantasy genre. We thought there was really an audience for a fairytale-esque but spooky musical - we wanted to play with the conventions of the musical genre and inject some darkness into it. I think the main challenge was to find an impressive old house to inhabit our ghosts.
You gave each of the ghosts strong individual screen personas. How did you achieve this? Were the actors involved in character development?
Elise: When we wrote this script it came with a big backstory and we wanted all the characters to feel needed and bring something to the story. I spent a lot of time working out who these people were and how they behaved with one another. However, who they became on screen was from not just the work I had done but during rehearsals and on set working with a talented cast. We built a great relationship in the process of making this film. I was always excited to hear their ideas and see what more they would do to bring these characters we had created to life.
Jess: We did actually originally want more than three ghosts - one for every room in the house - that would’ve made it a lot like a Greek chorus! However the advice from one of our lecturers to cut the numbers back and take some more time to focus on the three that we have was invaluable - as you say, you can sense more of their individual personalities and desires now that we’re focusing on less voices. The actors came on board once the script was completed and we had one rehearsal/recording day prior to the shoot - they all embodied the characters so well.
​The film has a strong aesthetic. What was your vision?
​Jess: It was extremely important to us that we opened the film with a bright Disney-style number - we wanted the audience to be familiar with this type of song that you’d expect from an uplifting musical - this was so we could mislead them before the events unfold later in the film. For the colour palette, lighting and costumes, we were extremely inspired by the live-action ‘Beauty and The Beast’ and ‘Cinderella’ films so we could establish Vera as the lead in her own twisted fairy tale that she is living.

​The house is almost a character in itself.
Jess: That’s amazing, thank you! We really wanted the house to feel larger than life but a particularly strange living space for a young woman to be in alone. Vera’s connection to her house is extremely strong because of who lives there with her - it was important for it to be the perfect balance of desirable and a little odd. We actually found the house locally because it was due to be sold at the time, and the very kind family who owned it allowed us to film there for just under a week before moving on. Our production designer Montana Allaway-North did an incredible job at making it feel ‘homely’ for someone like Vera - but the spaces themselves were very colourful and extravagant, so we were lucky to have such a great starting point.

​The songs are beautiful. How did you work with Demi Marriner and Robbie Cavanagh? How were the songs filmed?​
Jess: We’re glad you like them! Elise and I penciled the rough lyrics in our script, we outlined what we wanted each song to say and which story beats they needed to hit. We’d then send Demi and Robbie some songs that inspired us when we were writing, and they would then compose and write the songs between themselves. It was a really magical moment hearing ‘My Heart’ for the first time when Demi and Robbie played it to us - it really felt like the glue gelling together all of our months of planning. Prior to the shoot day, we prerecorded the songs in a studio with the actors and played them back on set for them to reference - this was a great method, but we’d heard each song about 100 times by the end of the shoot week!
A lot of the camera work is very fluid and musical.
Jess: Elise and our talented DOP Elliot Howarth worked very closely to recreate the iconic style of almost a ‘dancing camera’ that you see in huge-scale musicals such as ‘La La Land’, ‘Beauty and The Beast’ and ‘Singin’ In The Rain’ - they were definitely core inspirations and it was a challenge to recreate this on such a small scale project - but it really paid off!
Is the title sequence an homage? ​
Elise: So the title sequence came about because we were inspired by our test shoot where we made a little teaser for the film. We knew we wanted to have a long flowing entrance into the house to give a magical ghostly feel and to introduce the setting. After we made our teaser where we turned to reveal the title, Jess saw it and immediately thought of Harry Potter (her childhood favourite). So, from there we wanted to use the ‘going through the title’ technique as a nudge to that wonderful world of magic and mystery, an element we also wanted to capture in our film. 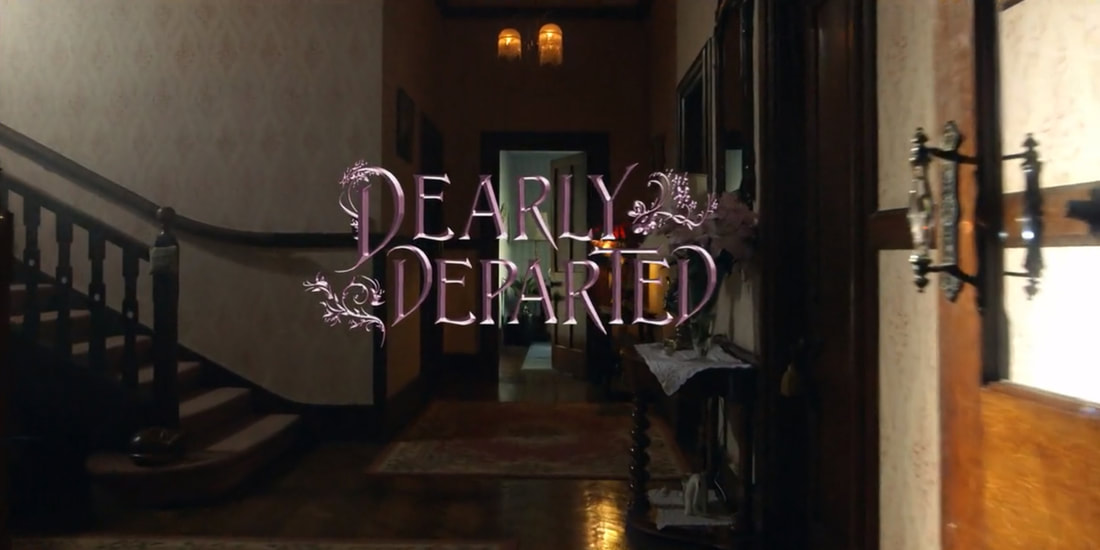 ​What do the cakes symbolise for you?
Elise: The cakes in the film represent a few things. In a more general sense they are the product of Vera’s creativity and build the ‘princess’ facade (so that we can later flip this expectation). For me they also represent an outlet for her emotions, when things become overwhelming or she feels anxious or more excitable she pours these emotions into her baking, something I have also often turned to over the years.

​Final thoughts
​​Jess & Elise: We’re so honoured to be a part of the BIAFF - to receive a Diamond Award for Dearly Departed was the icing on the cake, we can’t thank you enough! Dearly Departed was a huge part of our lives as we finished University and is very close to our hearts, so it’s always incredible to get positive reactions and feedback for the film two years on.
​​Jess: Dearly Departed is something Elise and I are extremely keen to revisit in the future - possibly as a feature-length film or an adaptation for stage. We love the story and characters, and have a lot more left to explore! Since Dearly Departed, Elise and I collaborated on our second musical as part of the New Creatives scheme in 2019 - since then, we’ve been brainstorming how we can bring new ideas to life in a genre we’re both extremely passionate about.