​back to interviews
Werner  Haegeman on making
​Thirst
​ 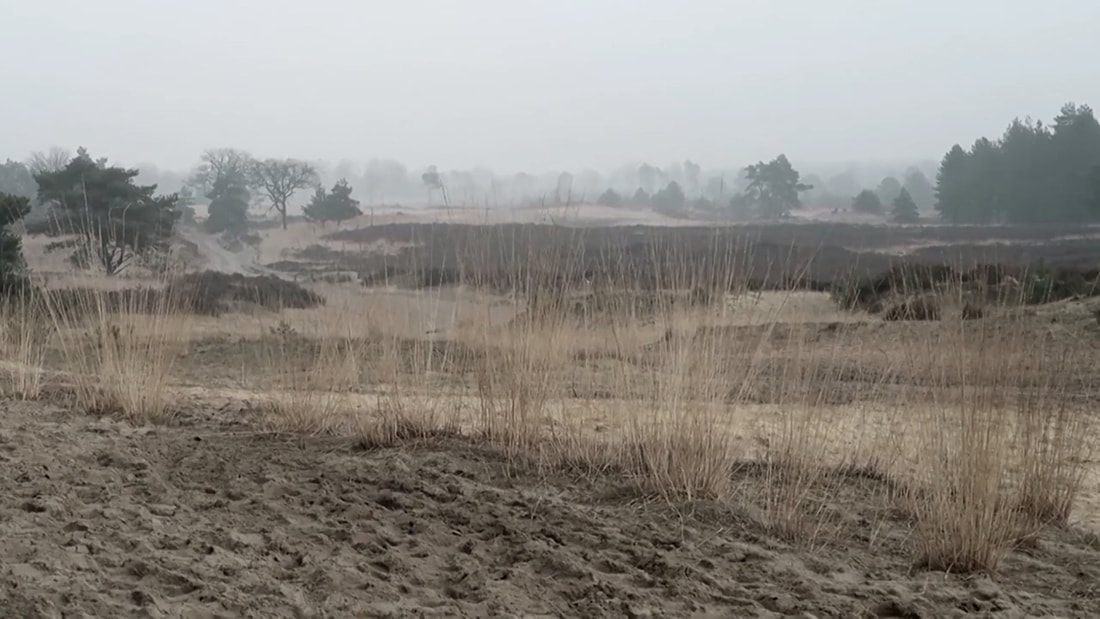 Thirst was filmed in a National Park near where I live. The place inspired me. It is desolate and rough. The film was difficult to make because everything takes place outside. The weather is unreliable in Belgium. 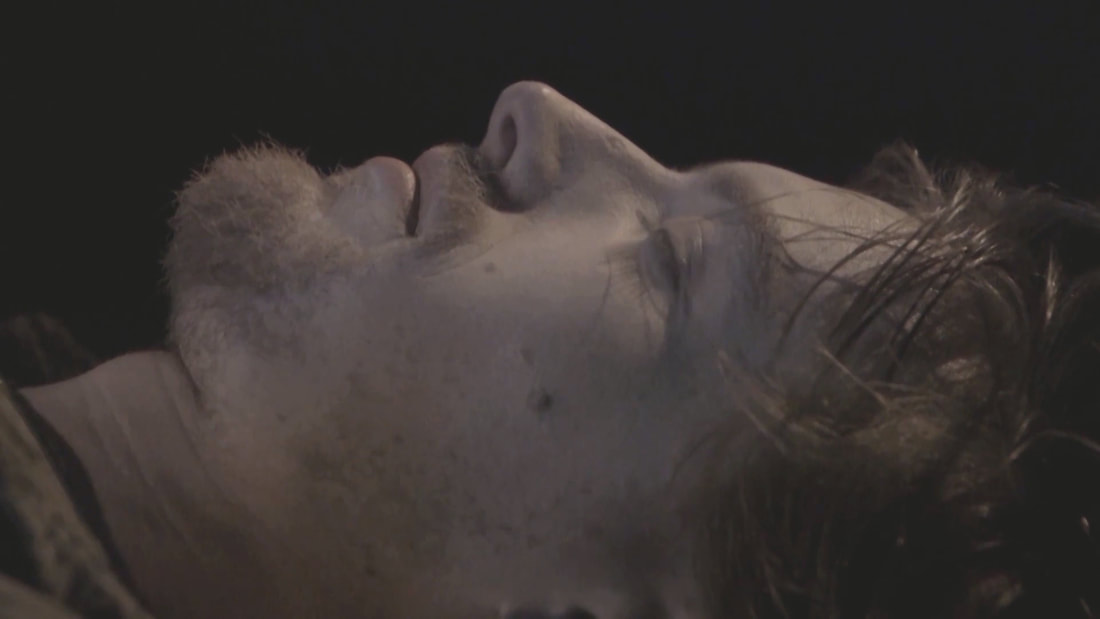 Also, there are lots of actors involved. Many of them are friends of my son, Janos, who played the lead male character. But I am always on the lookout for actors, asking people I meet if they know anyone who would be interested in acting. (Regulars at BIAFF will remember Francis de Ceuster who visited the Festival with Werner in 2019. Francis and two members of the de Ceuster family appear in Thirst.)
​Janos Haegeman, my son, plays the leading role.  He is the man who falls in love with the woman and who leaves the community together with her.
Francis De Ceuster plays the role of the older man with the broken glasses.
Roel De Ceuster is the man who steals water from the lake and is shot in the eye by the guard.
Annelies De Ceuster plays the role of the guardian of the lake.  She is armed with a catapult. 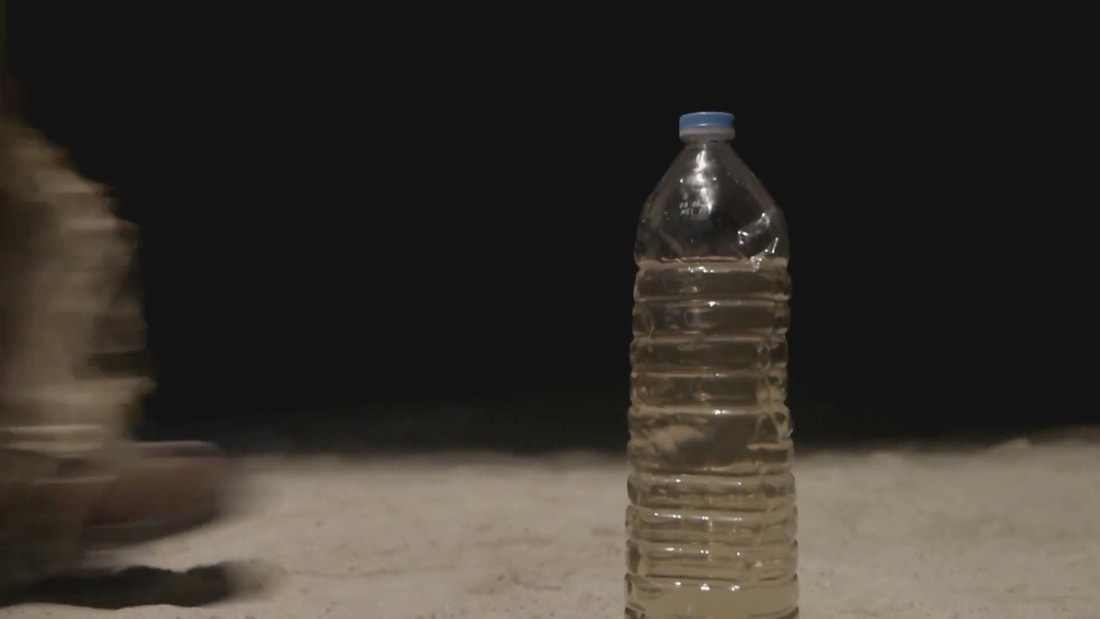 The story is set in a postapocalyptic period in which human values and norms no longer count. Human civilization has given way to an animal society. There is murder, rape, etc.
I wanted to imagine a totally new kind of society fundamentally different from the known “civilized” society. In this era there is a major shortage of water. The females (thanks to their talent of organizing everything) have clustered  around a pond and they have control over the water that is available.
As a result they also have power over the men. They use this power to obtain sexual services from the men in exchange for water, when it suits them. 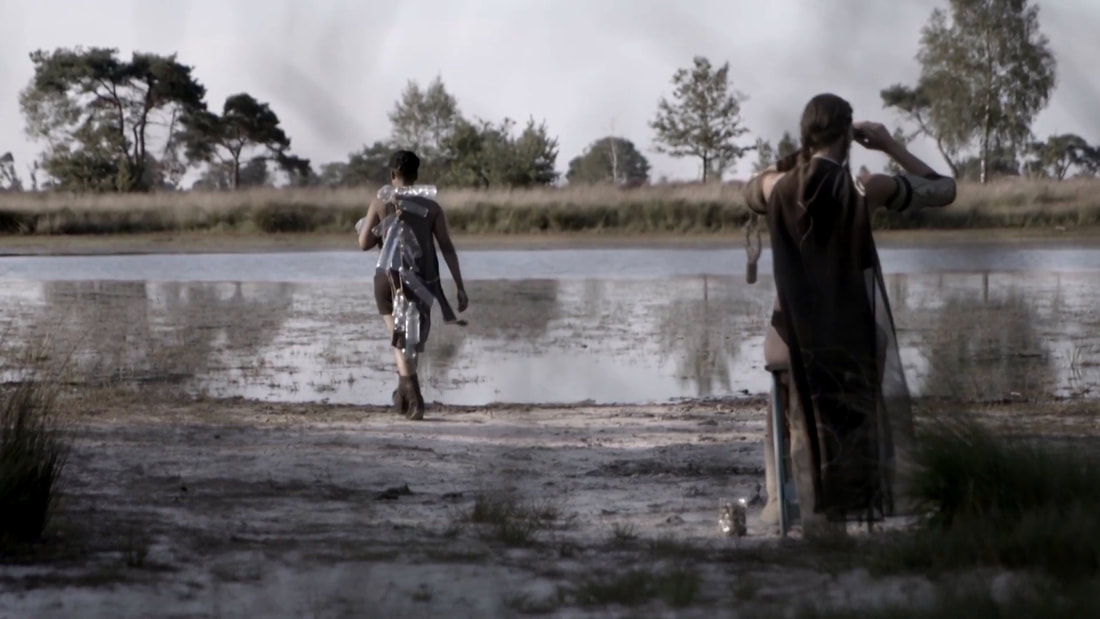 I wanted this society to have something human, but above all something animalistic. That’s how I came up with the idea of creating a community led by a kind of “queen”, in the movie a blind vamp with sunglasses, who leads her kingdom of women in a very intuitive way. (A little like the way bee colonies are organised.) The queen says nothing. She even seems stupid, yet somehow she forms the “spiritual” glue between all the other females.  It is also noticeable that whenever there is copulation between the females and the males, it seems as if she empathizes  with the sexual drive of her subjects from a distance. 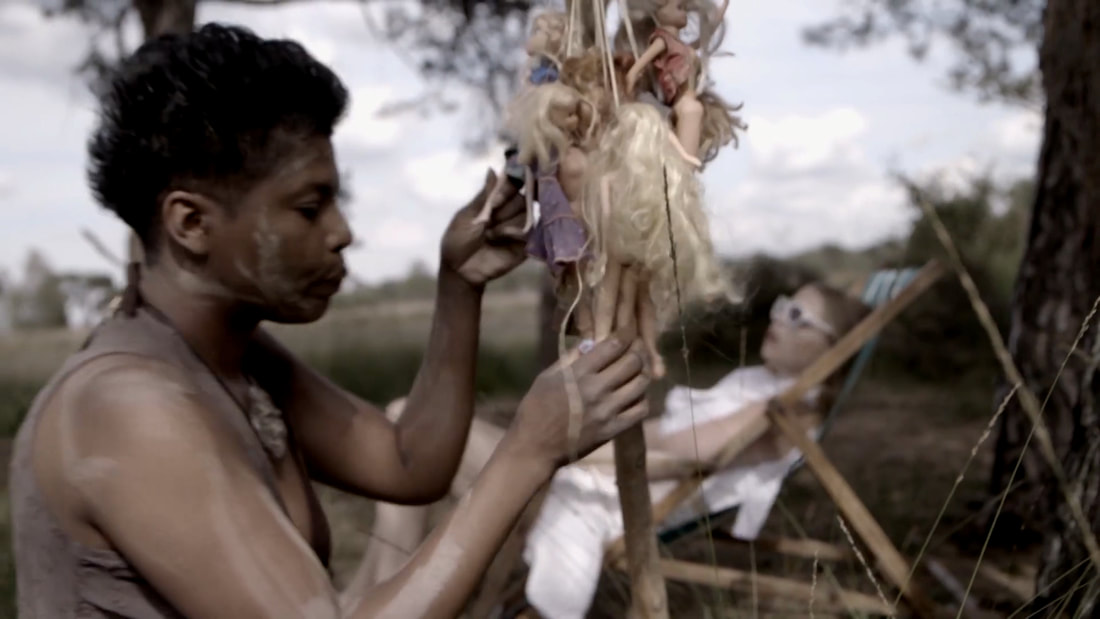 The queen has a second in command (a black woman) who, in consultation with the queen, controls the group of women. She controls everything and everyone and also determines which woman should copulate with which man. 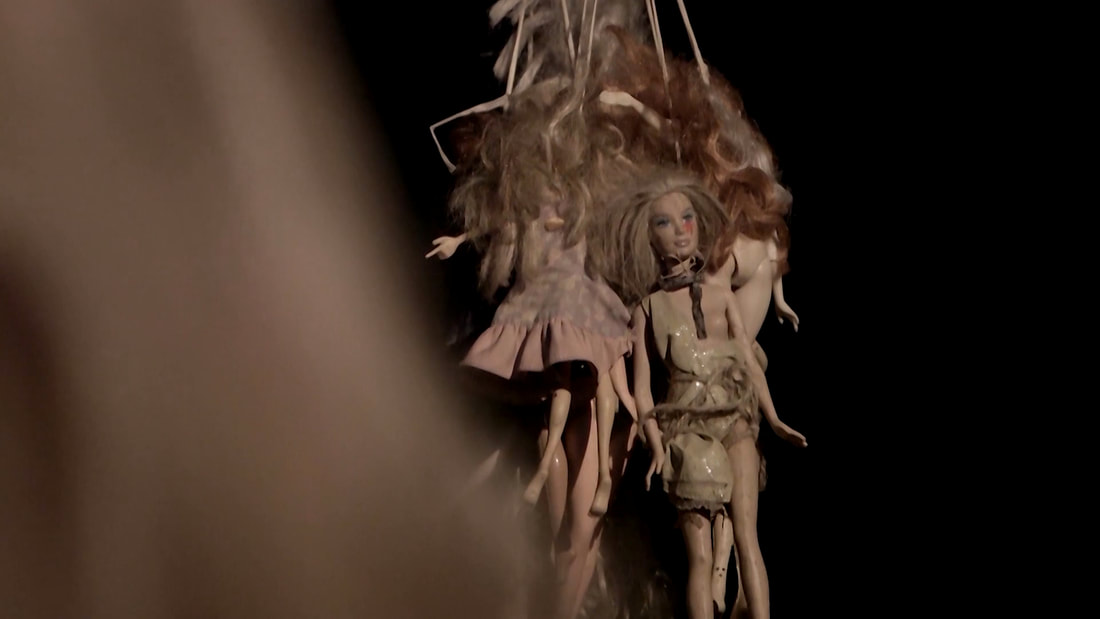 The group  of women she controls is symbolized and made concrete by a number of dolls dangling in a bundle from a totem stick.   There is a specific  doll for every woman.  The dolls can be remotely manipulated by the delegate in a sort of voodoo-like manner.   If a woman leaves the group, the corresponding doll is permanently removed from the bundle.
The reason why females copulate with the males isn’t really clear, but you can guess that the purpose, as with all life forms, is the survival of the species. However, you don’t see children anywhere in the film, from which you can conclude that something goes wrong in this form of society and that fertilization does not occur. 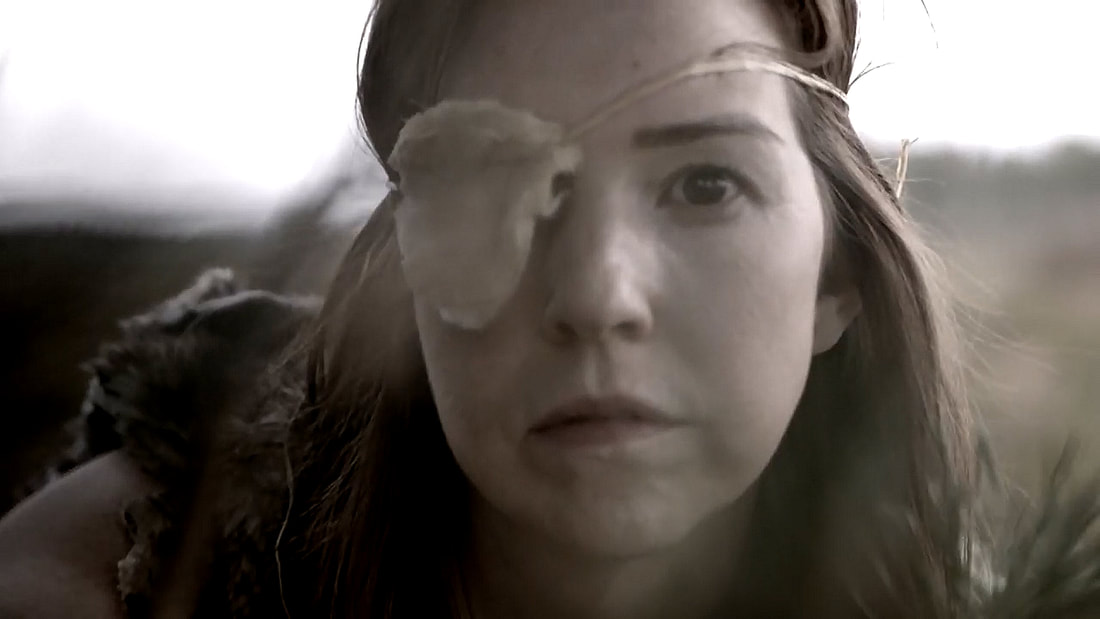 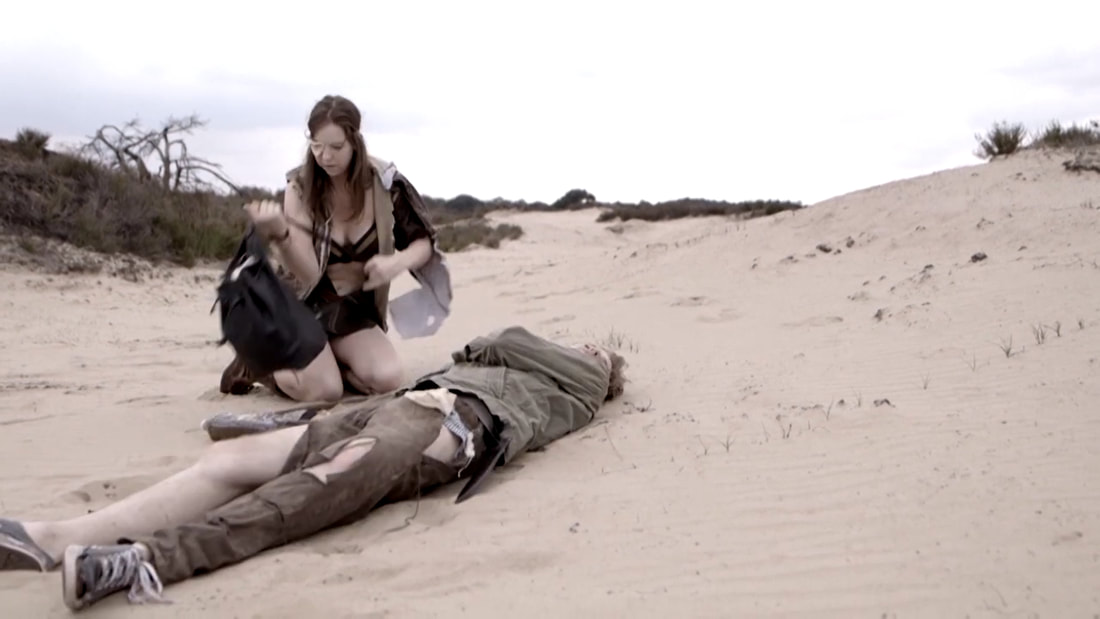 I think this is a romantic film.
Despite the ugliness and roughness of the situation shown, the positive message still stands that no matter how much man strays from our current level of civilization he still carries the germ within himself "to crawl out of the valley" again in order to have a beautiful and valuable life.

Imagine that after the complete decline of our current society a New World could arise in which a New Bible would be written to explain that New Civilization. Then this story could be the first story from that Bible. The moment when human feelings resurface and surpass animal instincts.

​Werner Haegeman, June 2022
​back to interviews